This weekend I participated on Beyond Hackathon, the 8th (and biggest) Hackathon I’ve joined with friends from DSG.

Beyond Hackathon was a FinTech Hackathon, organized by Eurobank between 17/03 - 19/03 at one of their buildings. The event attracted 38 teams from more than 5 countries. The first day was reserved for introductions/pitching so we only had the weekend to work on our ideas.

Our team consisted of 3 people, Dimitris, John and me. Due to difficulties Dimitris managed to join us only for the last day of the hackathon but his help and ideas were very valuable.

We had almost no experience around FinTech so we went without any idea on what we are going to build(like most hackathons in the past). After hearing the first mentor talking about customer experience we decided to build a system that will use facial recognition in order to inform the bank’s staff when a high value customer enters the branch so they can help him faster. 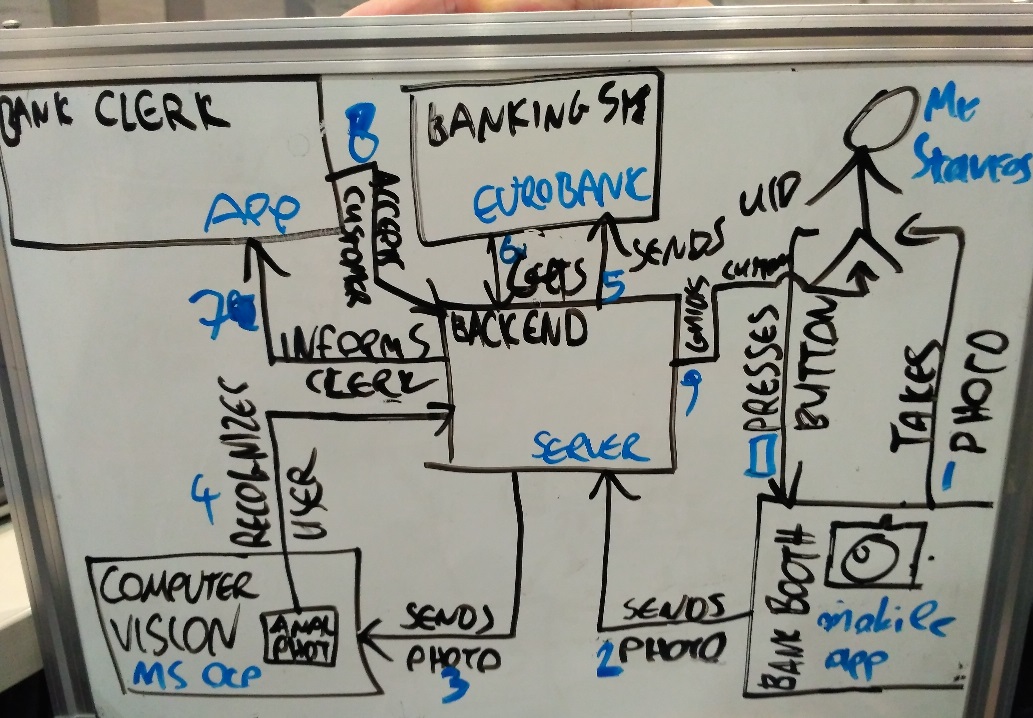 We had to code the following:

I spent most of the morning trying to generate azure keys and figuring out how Microsoft’s Face API works. While I was battling Azure, John was writing the mobile app that would simulate the bank’s camera. After the first lunch break we had a trained model with 3 faces and the camera app ready.
Sending the photograph to the backend and then checking it for a match seemed like unnecessary complexity so we decided we would use the Face API from the mobile app and just inform the backend on a successful match.
John started coding the API calls for the mobile app and I started working on the backend/frontend for our web application that the clerk would see.
By the end of the day we had a prototype! We could take and analyze photographs from the mobile app, forward successful matches on the backend that would then update our 20 line webapp via sockets in order to see who “entered the bank”.

The next morning we started thinking about how we would greet the customer that just got identified. After talking with the mentors we decided that on a real scenario the user could be informed by eurobank’s mobile app, since we didn’t have the options for that during the hackathon we decided to create a dummy application that would demonstrate the concept.
For the rest of the day I wrote code for the dummy customer app and got some data from Eurobank’s API while John was finishing the web application. Around noon Dimitris arrived and started working on our presentation.

The big time came, we didn’t have much time to prepare for our presentation but thanks to previous experience, especially on Dimitris’ behalf we didn’t do bad. We demonstrated our system by taking Stavros Messinis’ photograph on stage and identifying him as a high value customer(with a delay of ~2sec that seemed like an hour).

A few hours later the judges had decided. We didn’t get any of the first places but we were pretty happy because once again we succeeded on creating a working MVP in very limited time and we experimented with a pretty nice technology for the first time.

The first prize went to Block17 for their Blockchain-based bank-to-bank settlements system.

Hacking squad, a team from Serbia got the 2nd place for implementing banking functionalities with Amazon’s Alexa.

Wire Buzz got the 3rd place for an automated wire transfer notification system.

Overall the event was great and very well organized. I met a lot of great people and saw familiar faces from other hackathons. Hopefully I will be able to participate again next year!